Hello all. Its been a while, as you can see from the past date. I have taken this post from a forum I posted on several months ago, and have yet to update any pictures I've yet to take. Enjoy the pictures, and the background and stories. The stories are located in the links below, which will take you to DeviantArt, where more 'finished' pictures are also located.
War for Atalcina Pt1
War for Atalcina Pt2
Black Fists War Organization Chart for the two chapters


Founded in the year M37 from a surplus of tactical units, the Black Fists spent five decades training members to be specialized with devastator weaponry and in the form of rapid assault. Although the newly formed chapter had little to no experience in battle, Chapter Master Andre Cortola was soon to remedy that by bringing the Black Fists to battle with the dark treachery of Chaos.

After several incidents, the brothers who performed at a greater level of weaponry skill and tactics, were soon seen as the chapter’s elite. Chapter Master Andre Cortola soon made a point of forming proper companies after seeing initial performance of the marines. Following the strict Codex Astartes, Cortola soon had ten companies at full strength under his command.
Although the chapter closely followed the Codex Astartes, Cortola had put in an extra squad in his elite First Company. By doing so, he had ten extra marines to bolster the attack of the core force. The First would always move as one, soon to be known throughout the chapter and the home systems as Cortola’s Hammer was swift to bring destruction to the enemies of the Holy Emperor.

The chapter itself is a master of siege tactics. No match for the Imperial Fists themselves, the Black Fists have been known to hold citadels under siege for years, eventually flushing out the enemy from within. The commanders of the Black Fists are well versed in tactical planning, rehearsing every movement before it happens.

The Black Fists embrace the Codex Astartes readily, and receive training of all aspects of combat as written by Roboute Guilleman.

Once recruits are selected, their criminal record is examined, and they undergo a battery of tests: musculature, psychological profile, psychic level, eye reflexes, intelligence, the ability to shoot, pain resistance, and dexterity. If they manage to pass that, they face extreme heat, cold, empty space, and any other condition they may face on any warzone. The severity of testing increases along the way. If the initiate passes, he becomes a cadet and the symbol of the Black Fists is marked on his left shoulder. Then begins the indoctrination, training and the actual surgery that will make them Marines. After the initiation ceremony, the cadet's family is informed that their child has become a Space Marine to ensue a matter of pride in the families.

The 1st company always marches together as one, with the Captain of the Company always being the Chapter Master as well. As with the Crimson Fists, it is considered a bad omen to march to battle with less than a full veteran company.

The Black Fists have always had close ties with the Imperium and the Inquisition. They have contributed many warriors to the kill-teams of the Ordo Xenos, being renowned Ork fighters. Many of these kill-team warriors have made their way back into the chapter, and even into the veteran company.

Chapter master Cortola is a veteran of over three hundred battles, most of which are against the foul Orks. He has battled against Orks so often that he knows how the greenskins think. He can predict their movements and where they’ll have emplacements. This wealth of knowledge has been well used during several large wars, such as the Waaagh Hargrutz and the Gragnutz uprising.

Taking one thousand fresh recruits, Cortola made way on the Battlebarge Knights Glory to find a new homeworld close to Terra. Eventually landing on Abregado, a lush planet with a large indigenous human population. They did not have the technology yet to venture into space, but they had been visited by many ambassadors of the Imperium, and they knew well of the Space Marines.

The chapter moved as a whole to the planet of Abregado to construct a fortress monastery, and by doing so, duly populated the planet. The first few years after constructing their monastery went to recruiting from the entire planet’s population, recruiting around three-hundred neophytes to become scouts, though only two-hundred and fifty survived the initial tests administered by the chapter.

The first company, or Cortola’s Hammer, travels around the universe as one force together, lead by Cortola himself. They travel in one of the chapter’s strike cruisers Victory’s Grasp which always seems to get them to the planets surface in one piece, not once being attacked in the Warp and always getting them through planetary defenses. The company always descends to the planets surface via drop pod or teleportation. After an initial drop point is secured, Thunderhawks will bring down Land Raiders, Rhinos and Razorbacks for the company to move to the next warzone in.

The company has scored several hundred victories, from small incursions in-system, to aiding in the Third War for Armageddon.

This post was started on August 12, 2009 on Ammobunker Forums. :)
So with my first chapter, The Royal Redeemers, and the most recent, The Sapphire Saints, both have almost failed miserably. In fact, the Sapphire Saints didn't really fail...yet, but I was having a very hard time coming up with a chapter icon. I was surfing the B&C boards, and saw several AMAZING Imperial Fists armies, like Shaw3029 and Inquisitor Engel's. I decided to make my new chapter, the Black Fists, be a successor of them. Obviously by the name, they're a mix between the Black Templars and the Crimson Fists.

The Chapter as of December 22nd, 2010 There is another Thunderbolt, but it was presently in a box to be shipped to Australia, but thanks to eBay, it didn't actually sell... 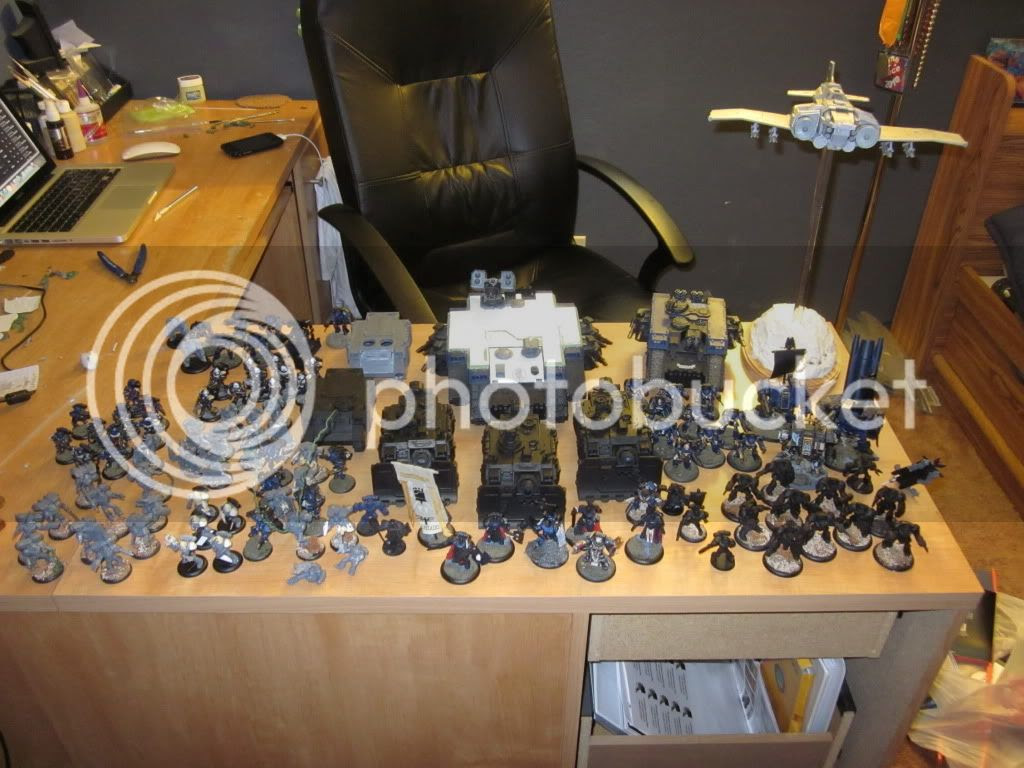 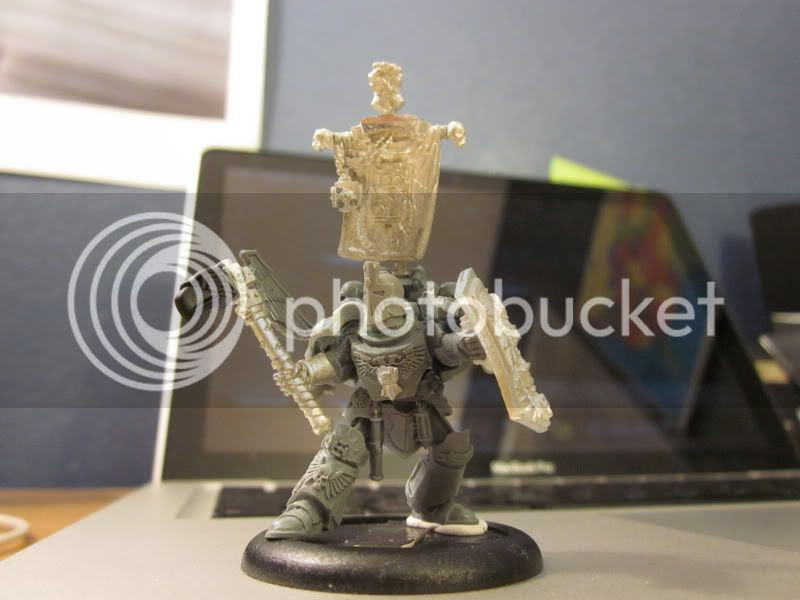 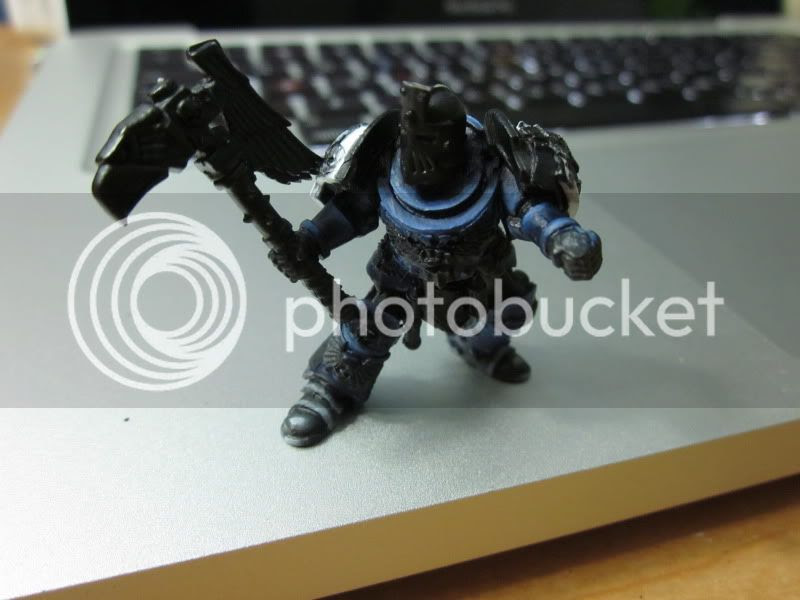 Squad Prometheus.
The members of Sternguard Veteran squad Prometheus have been hand selected by Sergeant Andromedus. Each member has been in the squad for over a century. They have all had extensive training with every weapon in the Space Marine arsenal, though they are highly specialized in all forms melta weaponry more so than any other. As Prometheus was a being of fire, they use the burning might of melta weaponry to take down their foes. 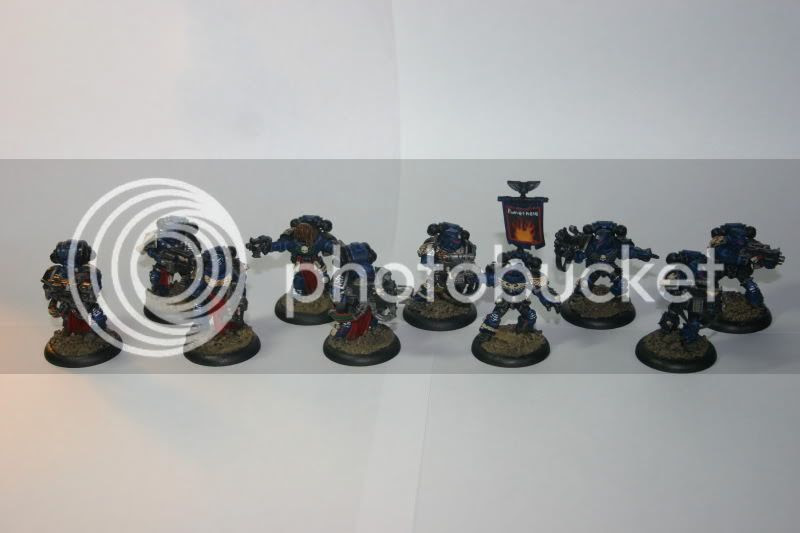 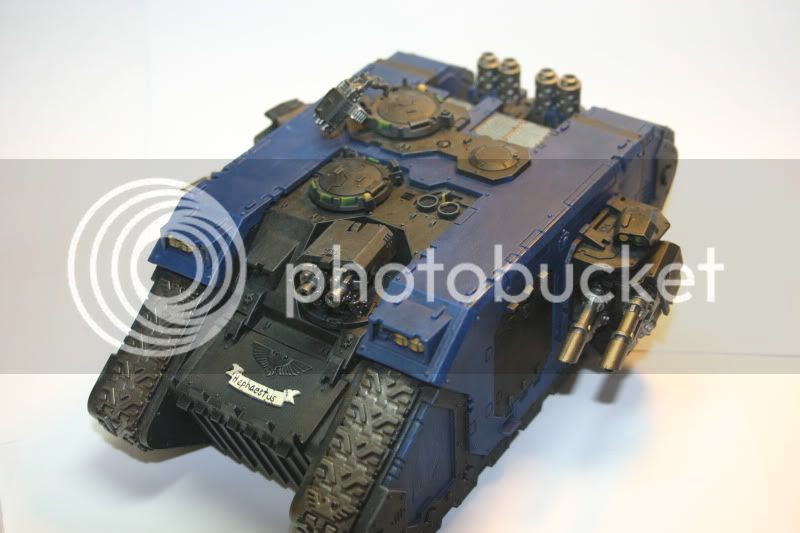 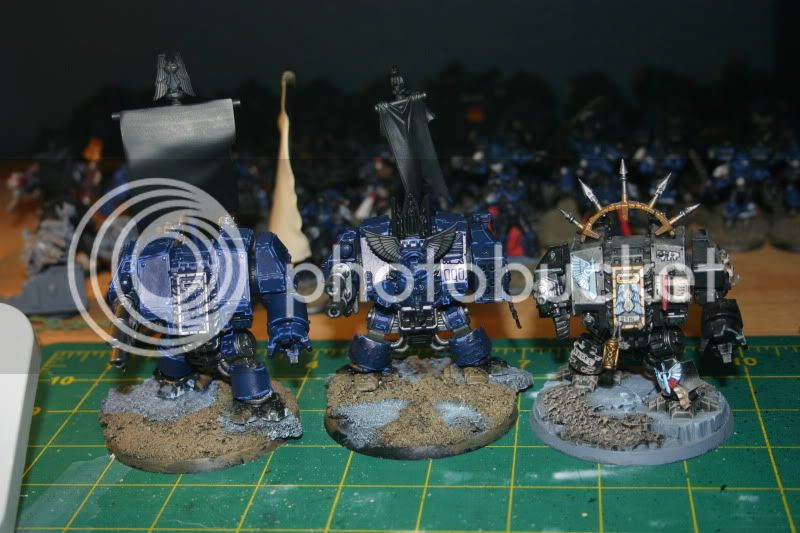 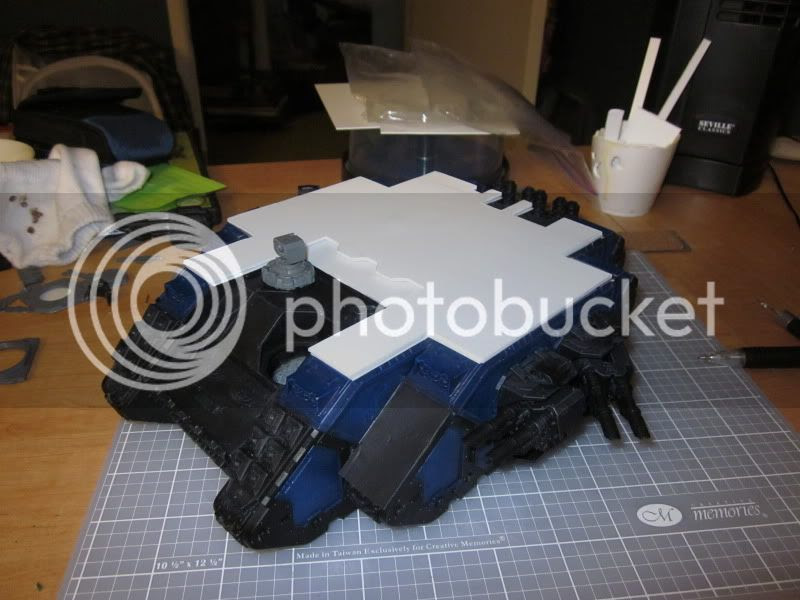 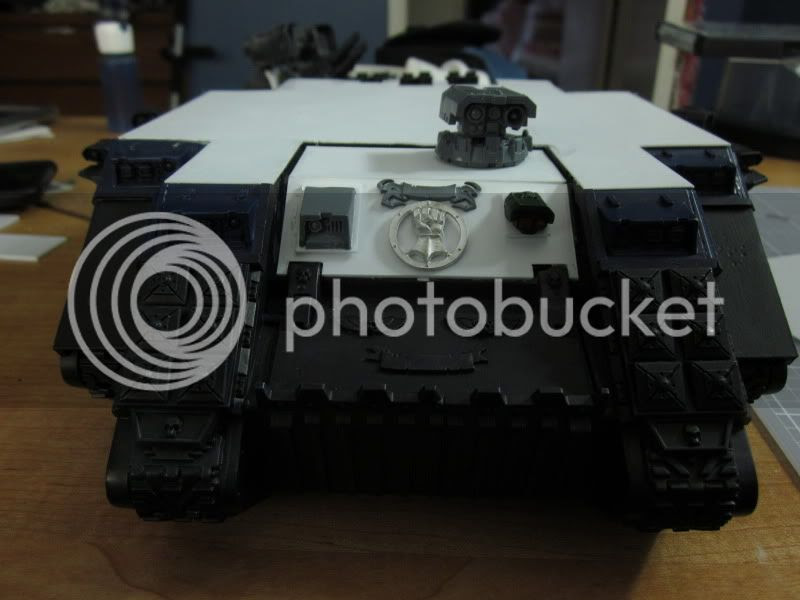 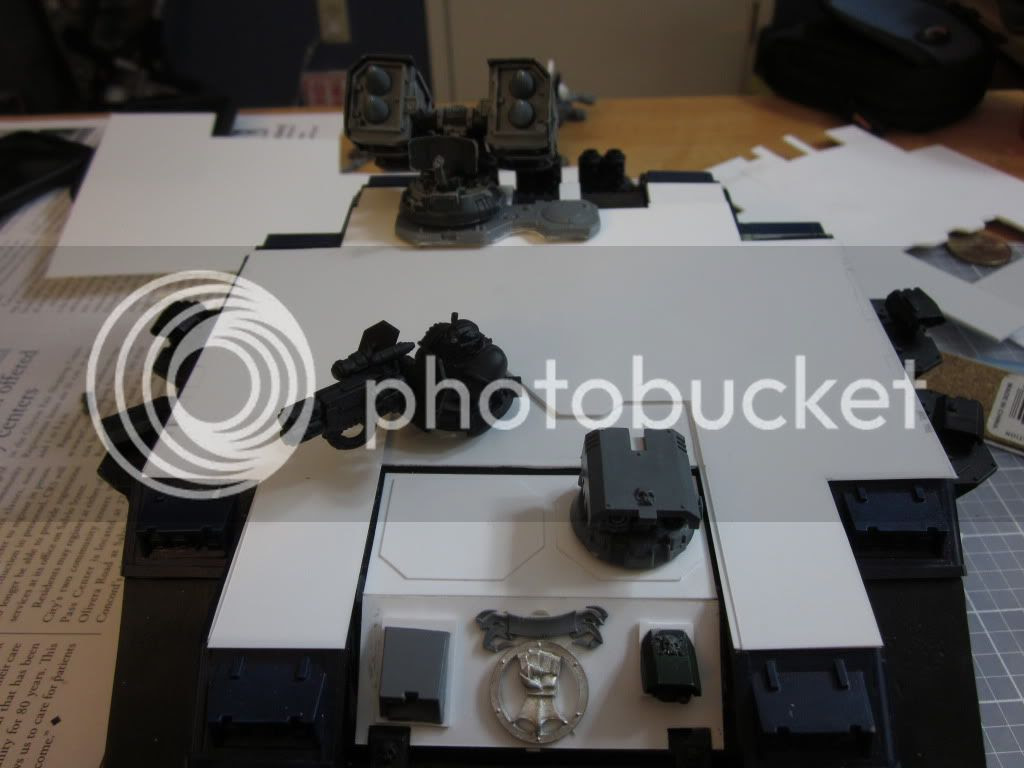 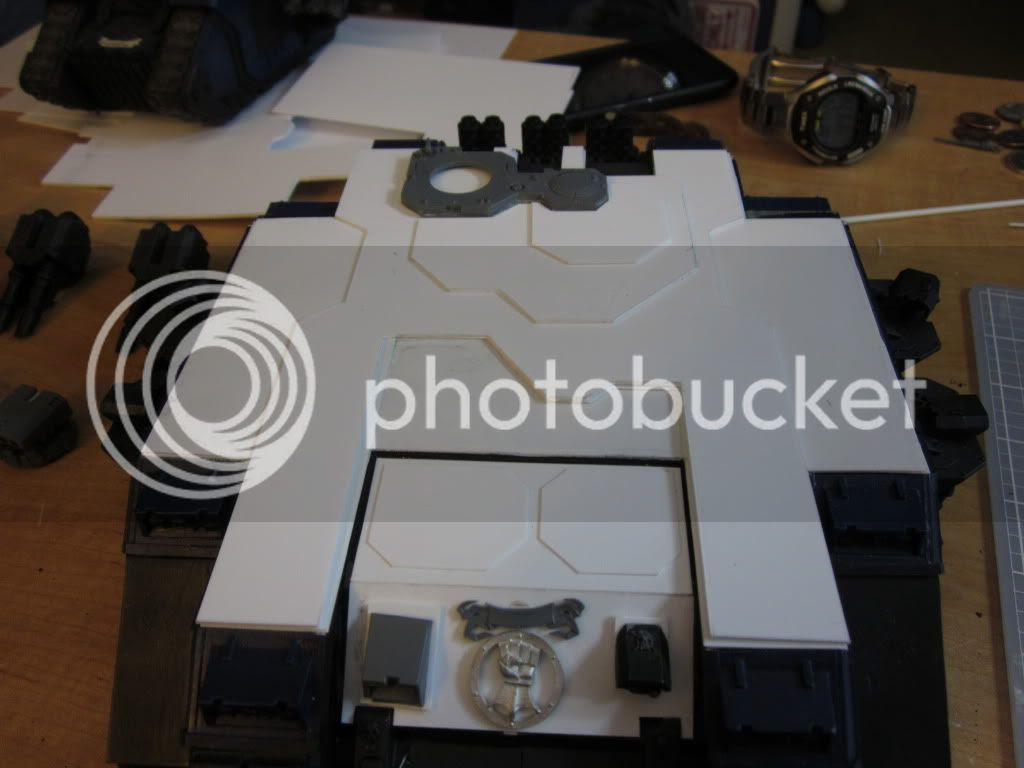 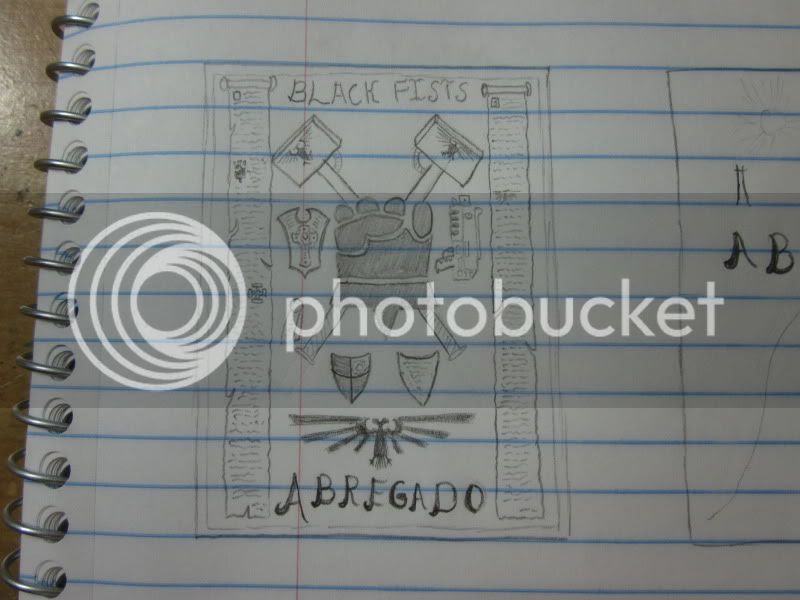 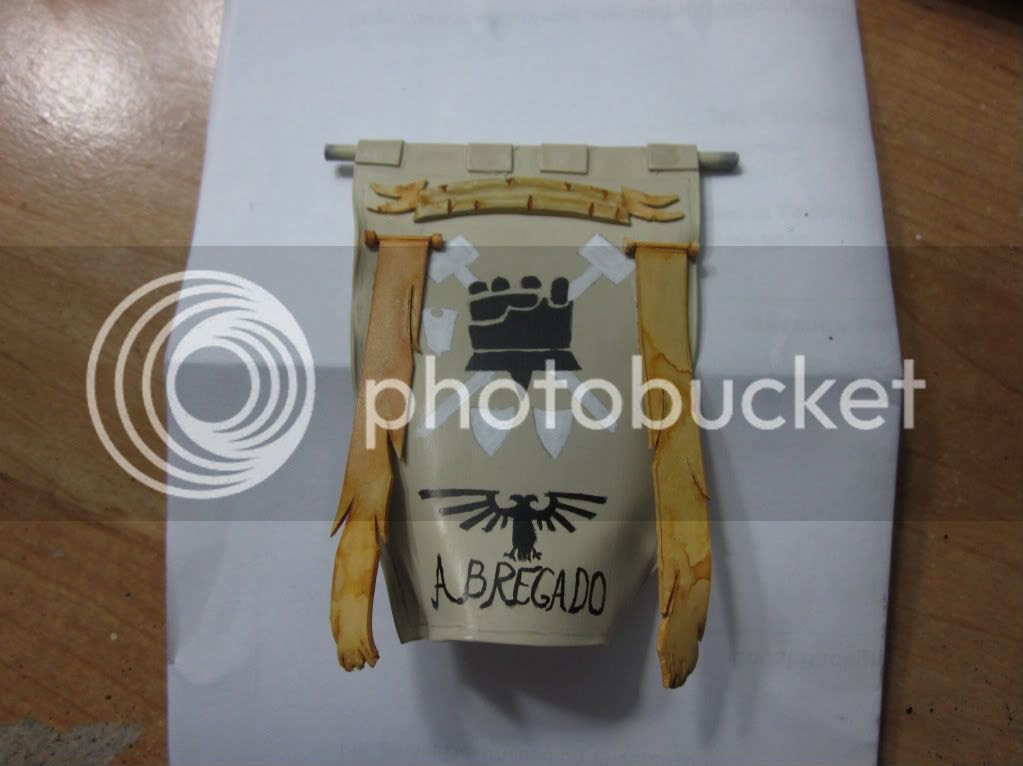 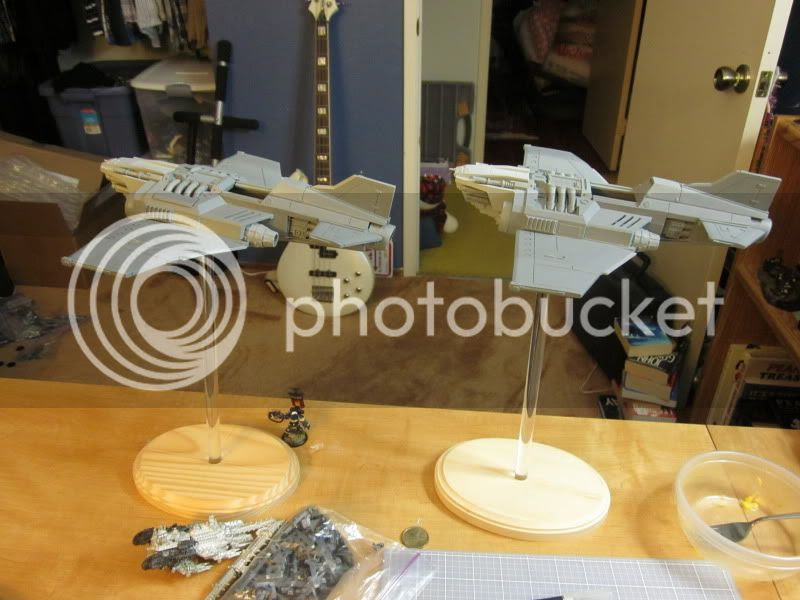 Thanks for stopping by. I hope you've enjoyed the quick burst of pictures. Feel free to skim the thread for the other pictures, or just skip to the end, and drop a cent or two. ;)
Seeing as I stopped modeling and painting quite some months ago, you may or may not eventually see finished pictures.


Have a nice year.
Personally,
-Shortsonfire79
Posted by Unknown at 12:10 AM No comments: