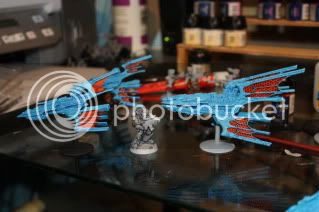 Be a couple of Eldar ships, painted up (WIP of course) by DirtyWaterPainting. With a scale shot of a 40k Space Marine.

Judging by the size of the comparison, I'd say that the ship on the right, would be about 5 or 6 inches long. PERFECT size for conversions =-D
I'm going for some Imperial Ships, to make a LARGE (maybe 10 inches or so..) SuperShip. =-D I don't exactly know what I'll be doing off the top of my head..but I have a pretty good idea.
-------------
Another one of my ideas that I recently cooked up..was a council of builders. Tau, Space Marine, Imperial Guard, Orks, Eldar, Necron, Tyranid.
In this crappy picture I just drew, its hard to see (with or without blogger's small pictures) I posted it slightly larger so you can click on it to see better. 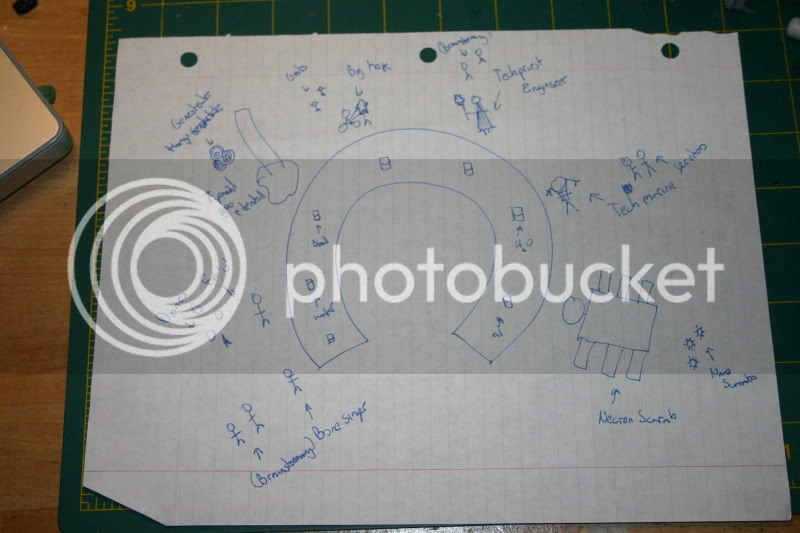 I'm thinking of doing a full table, and make it sort of like the Council on the Death Star..like in this scene Image. At the head of the council, I'll find some Asian Authority-like model, to represent me =-D Since this IS Shortsonfire79's Modeling Council.

Big Mek- "Me dinks we need more Orky kunversions"
(Precursor to whats next >=-D )
Posted by Unknown at 1:42 AM