I came home early from camp, Monday... but its been 2 weeks since then, and I haven't updated...I haven't done any sort of modeling...

I hope you've all seen the new Codex, (or a 2005 edition of White Dwarf). I'm going to detail my LRE like The Maximus, Marneus Calgar's Land Raider. I like the trim, but I'm not sure if I do this all the way around my LRE if it'll be too much...but oh well, it'll be awesome. 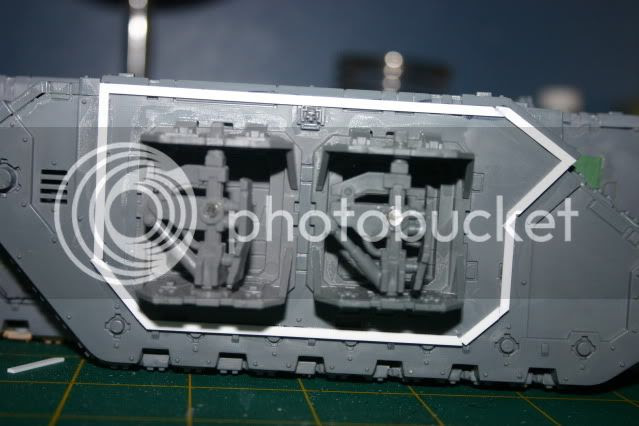 Its going to be a real pain in the neck to do this all the way around...It took me near and hour to do just this small part! Ridiculous. But for some of the harder pieces (with the horrible angles) I already copied 4, so they're all the same! =-D I Sharpied around where I want it all, and I tell you now..its not going to be an easy task =-(
Also, if you look at the Maximus, it has track cover-like things on it, I'm going to be doing that for the outside tracks as well =-D
No update on the DA Chronus.. =-(

Well Horatio: Not much done by this Asian...I don't know if I really am going to be doing the Redeemers or not... =-/ I just haven't been in the mood to do anything.
Posted by Unknown at 10:46 PM