So with my first chapter, The Royal Redeemers, and the most recent, The Sapphire Saints, both have almost failed miserably. In fact, the Sapphire Saints didn't really fail...yet, but I was having a very hard time coming up with a chapter icon. I was surfing the B&C boards, and saw several AMAZING Imperial Fists armies, like Shaw3029 and Inquisitor Engel's. I decided to make my new chapter, the Black Fists, be a successor of them. Obviously by the name, they're a mix between the Black Templars and the Crimson Fists.

So far, I have about 35 models, plus or minus some of the weird characters I've made. I'll be doing some lame-basing, because I tried adding some Tyranids, but that didn't work, so I pulled them off. I added some 'shells' on the ground, and from about a food away, they look pretty good. Idea contributed by T.J. Gunnel!! 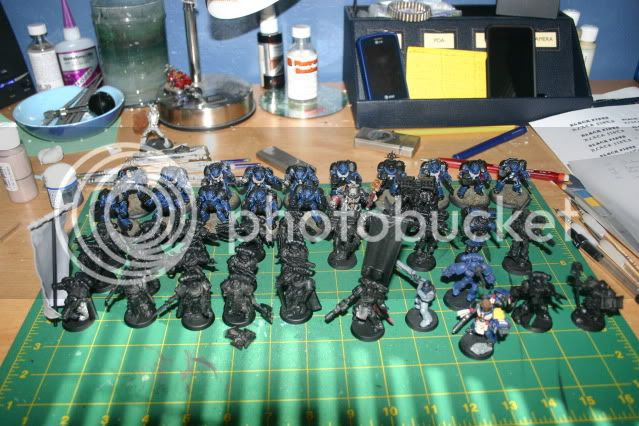 My command squad is comprised of the Chapter Masters that came out in Apocalypse. I had two boxes, so I had to split one up =-( But I think I can use the characters later on. I hope to maybe get all of the Space marine characters in my company one day, like Inquisitor Engel.
I have only finished half a Terminator squad and a Chaplain, but that was with the RR. 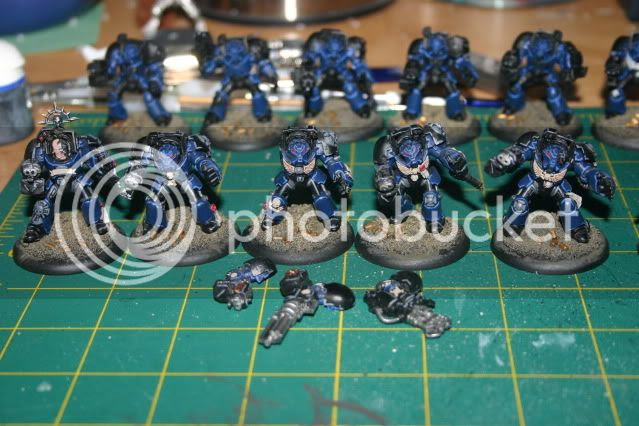 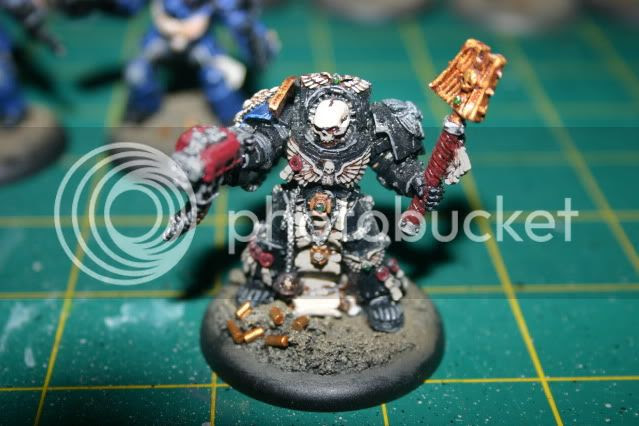 I'm still working on the iconography a bit, but I just pulled up Lexicanum, and use some tracing paper and did a bit of brainstorming. My company standard bearer holds a standard of 3ish inches...which means more space for me to pretty up...if I can =-P I used Microsoft Word to find some nice fonts for my chapter title, and added them to my tracing paper. The picture provided, I traced in pencil, then went over with Rapidograph pens. Unfortunately, most of the pens are clogged, so I had to use fatty ones =-( I need to get those fixed. 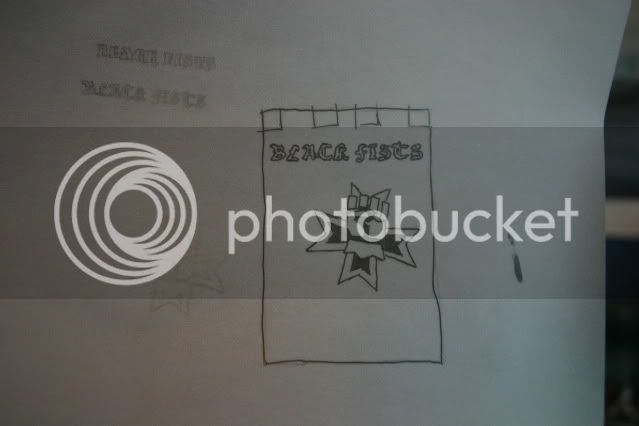 I have 5 of the Vanguard Veterans, and I have some MkIIs, and I hope to get 5 extras of the nice jump packs for the MkIIs, so they'll fit in with the squad. I also have 5 of the Sternguard Veterans, and I have a squad of Devastators still sitting on my desk from last week (I'm surprised I haven't started working on them yet.)
For my Company Captain, I want to use Commander Cullin from the Red Scorpions.
Posted by Unknown at 11:32 PM