Auugh.
So tonight, I went out to play Commando with my friends. Commando, if you don't know, is a huge game of tag. You get from landmark A, a school, to landmark B, another school, about 2 miles away. At night. And you're running from people on cars, and they chase you down, and drag you into their car. Its dangerous, and fun as hell.
I almost made it to the end, but I was about 30 feet away, and I tripped on a stump B) (it was pitch black, and i was running hella fast from a truck) and ate $#!T, and I wasn't wearing a shirt.....and it kinda hurts bad... Screwed up my knee hella bad too. =-P Hella fun. BUT I made it!! :D

I think..I think (Unless you guys think they could use more work) I finished the tabbards on my guys. I'm not super pleased, but I hate tabbards, and I don't want to mess with them any more! :o 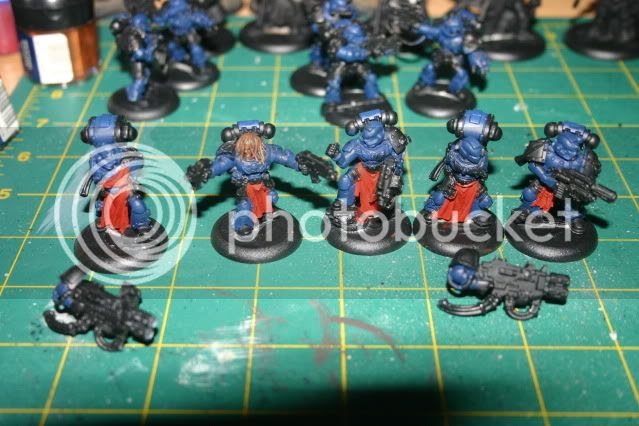 And while I was at it, I went and painted the head on dreadlock guy, since once I highlight the blue, it'll be a pain in the arse to get to....and now you know hes actually black, and not a Space Wolf. 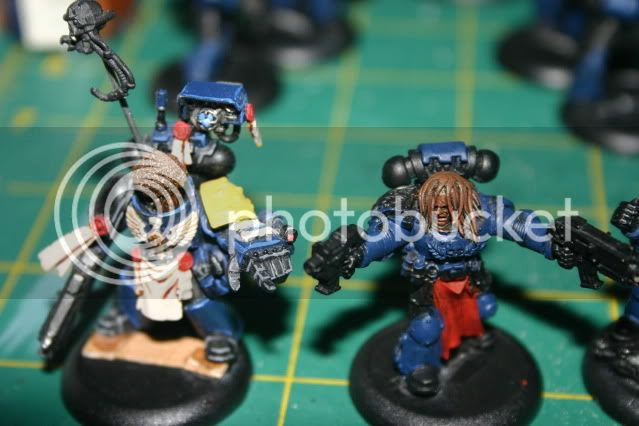 What do you think? I might end up updating tonight again, if I make enough progress! Which would be rad. <<< Californian, I can say that :D
Posted by Unknown at 11:34 PM